HS2 Gets a green signal, again! 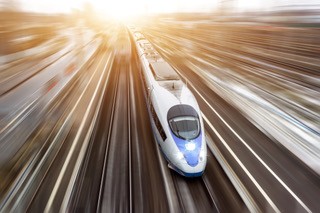 Following months of speculation that Boris Johnson was ready to shunt the controversial HS2 project into the sidings, the Prime Minister finally gave the 345-mile new railway from London to the north of England the go-ahead in February. Writing for Cogitamus Limited, Chris Randall says that after more than a decade of argument, muddle and delay, getting the line built is long overdue.

Here’s a starter for 10. Who said the following and when did they say it?

“Looking around the world, the evidence is clear – nation after nation is planning, constructing or already using high speed rail lines. Self-imposed exile from this new frontier in travel would mean that Britain loses out, while our global competitors gain. We face a straightforward choice. We can take the short-term option – leaving our rail networks over-stretched and over-burdened and risk paying the price in lost business, lower growth and fewer jobs. Or we can take the long-term option – investing in our global competiveness and our economic prosperity by pursuing high speed rail.”

Hands up all those who recognise this as a call to action from Prime Minister Boris Johnson, who gave High Speed 2 a green signal in Birmingham in February flanked by his soon-to-be-departing chancellor, Sajid Javid. Wrong! In fact, this full-throated endorsement of a new high-speed railway from London to the Midlands and the North of England came from the Right Honourable Justine Greening MP – remember her, anyone? – during her brief tenure as Transport Secretary in January 2012.

In the eight years since Greening made an unequivocal case for the construction of a second high-speed railway in the UK (the first being the 67-mile HS1 railway linking London to the Channel Tunnel), equivocation has ruled. In common with many of Britain’s trains, HS2 is running late. Very late, in fact. Phase One from London to Birmingham, which was due to be completed by 2026 is unlikely to be carrying fare-paying passengers until 2031. The second phase to Manchester and Leeds, which was due for completion in 2033, is now expected to open between 2035 and 2040.

Like many major infrastructure projects in the UK, HS2 has been bogged down in a morass of prevarication, wrangling, political posturing and escalating budgets. A railway that was originally costed at £42bn could, by some estimations, end up with a whopping price tag of more than £100bn. Faced with such eye-watering sums, some previous proponents of the scheme, including Alistair Darling who signed off HS2 when he was chancellor of the exchequer in the dying days of Gordon Brown’s Labour Government, now believe it represents poor value for money.

Back in 2014, when he was Mayor of London, Boris Johnson supported HS2. He accused opponents of the railway of talking “bollocks” and claimed some protesters were only pretending to care about woodland or wildlife when the real cause of their fury was the fear that the value of their house would take a hit. “People are in the humiliating position of having to pretend that there’s some environmental objection that they have, that the great crested grebe is going to be invaded or whatever. What they care about is their house prices,” he told Total Politics magazine.

Mayor Johnson, who professed himself to be a “big believer in big infrastructure” had some advice for the then Coalition Government. “What the Government should do is do what they do in France and say ‘right, you’ve got a problem?’ and go to every single household with an absolutely massive chequebook and say ‘here you are, what’s this worth now? OK. Brilliant’, buy it and pay them absolute top dollar for all their property…then, when the whole thing goes in and is a success and generates a movement to the area, lifts the economy and the prices go up, well who’s quids in? The Government.”

Fast forward five years and the newly appointed Prime Minister Johnson was significantly less strident in his support, no doubt influenced by growing hostility towards HS2 from within his own party, including members of the cabinet. Waving the massive chequebook no longer seemed such a smart idea. So, one month after becoming PM, he sub-contracted the tricky decision on whether to proceed with HS2 and commissioned an independent review headed by Doug Oakervee, a former chairman of HS2 Ltd, who was on record as saying that cancelling the project would be “catastrophic for the UK”.

When Oakervee’s review was finally published, after sitting in the PM’s in-tray for several months, it was just what the doctor ordered as far as Johnson was concerned. It provided cover for him to push on with a hugely contentious ‘grand project’ that will, he hopes, re-balance the UK economy and boost growth in northern towns and cities that ‘lent’ him their votes in last December’s general election. It also gave him a not-to-be-missed opportunity to kick the hapless management of HS2 Ltd and firmly shift the blame on to them for a soaring budget, lengthy delays and poor public relations. “When it comes to advocating for HS2, the task is not made easier by the company HS2 Ltd,” he told the House of Commons. “I cannot say that HS2 Ltd has distinguished itself in the handling of local communities. As everyone knows the cost forecasts have exploded.” Ouch!

Running to 130 pages and containing 63 conclusions, the Oakervee review is crystal clear that HS2 should go ahead in its entirety. If it was cancelled, warns Oakervee, many years of planning work would be required to identify, design and develop new proposals. In other words, the claim often made by critics that the money saved by scrapping HS2 could be diverted to improving the existing rail network just doesn’t stack up. There are no shovel-ready schemes waiting eagerly in the wings.

Oakervee recognises what most passengers already know: that there is an urgent need for greater capacity – both more tracks and more seats on trains – and reliability on the rail network. Passenger journeys were predicted to increase by 17-21% in the decade from 2011; in fact, they rose by 24% within just seven years. Without HS2, the choice, says Oakervee is either a costly upgrade of existing lines with decades of inconvenience to the travelling public or simply price passengers off the railway, a method for tackling overcrowding favoured by British Rail before rail privatisation.

A standout conclusion in the review is that HS2 should not be viewed as a standalone project. Other major railway schemes currently on the drawing board, such as Northern Powerhouse Rail and Midlands Engine, should be designed, built and delivered along with HS2. As Oakervee says: “HS2 can be part of transformational economic change, but only if properly integrated with other transport strategies, especially those seeking to improve inter-city and intra-regional transport, and also with national, regional and local growth strategies. Transport investment alone will not ‘rebalance’ the UK economy.”

Boris Johnson will now be hoping that by accepting most of Oakervee’s conclusions he can, for now at least, put a lid on the heated, often toxic argument about HS2, which at times has seemed like a re-run of the Brexit debate. In 2011, a year before Justine Greening was enthusiastically urging MPs to embrace HS2, the Commons Transport Committee noted that whilst the high speed line offered “a new era of inter-urban travel in Britain” the poor level of public debate had failed to address the facts and had resulted in name-calling and accusations of nimbyism.

Almost a decade later that criticism still resonates. The debate about HS2 will rage on, up to and probably beyond the time when the last engineer has departed, and trains are running on the line at speeds of up to 250mph. Doug Oakervee’s warning that there would be serious consequences for the supply chain, the fragile UK construction industry and the confidence in the UK infrastructure planning if HS2 were cancelled at this late stage, has been heeded. For that, at least, the scheme’s many supporters should let out a sigh of relief. But if we have learnt anything from the last decade it is surely that the UK must devise better ways of designing and implementing major transport projects. Having a coherent national transport strategy would be a good start.

This article has been commissioned by Cogitamus, an experienced public affairs and communications business established in 2007.

The author is an award-winning transport journalist and former senior manager in the rail industry.