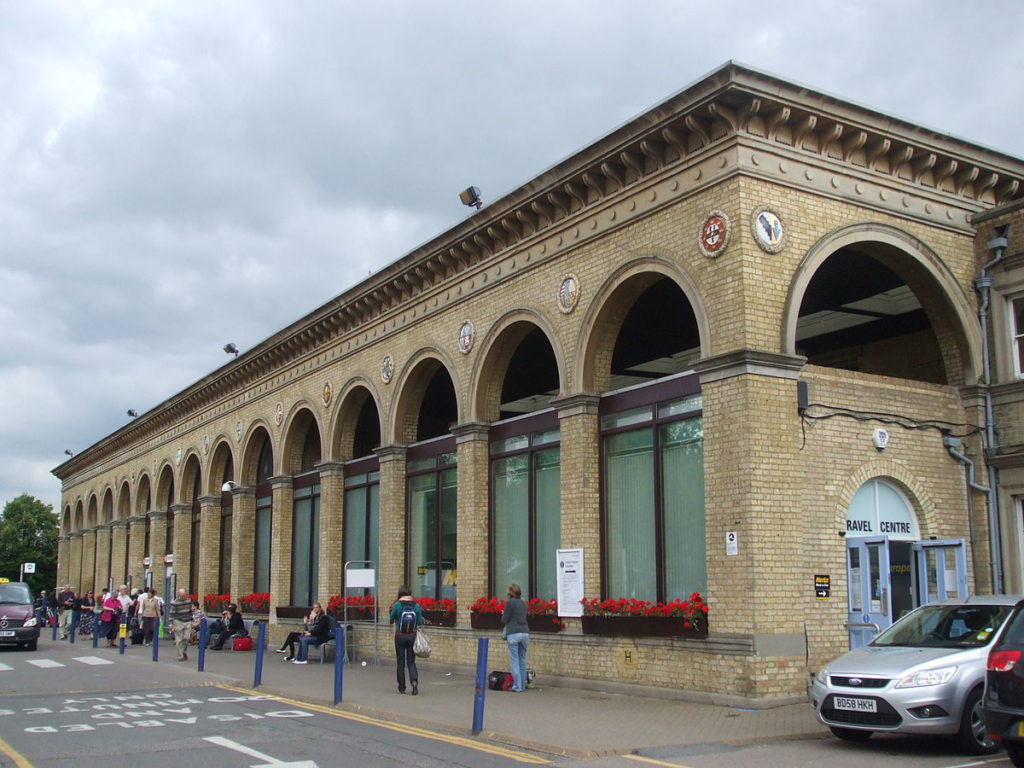 A new railway linking the university cities of Cambridge and Oxford is predicted to be the catalyst for a UK version of Silicon Valley. Predictably, it’s construction is behind schedule, as Chris Randall explains

Oh, the trials and tribulations of being a government minister in the age of coronavirus. In his Covid-19 press conference on 23 May, the Transport Secretary Grant Shapps boldly declared that the health crisis had created an “opportunity to use transport to create something better”.  With one eye on Prime Minister Boris Johnson’s pledge to ‘level up’ the country, Mr Shapps conjured up a vision of re-opened railway lines and new stations popping up all over England, from the Isle of Wight to Lancashire and Somerset to Northumberland. Where, once upon a long ago, the infamous Dr Beeching had wielded his sharpened axe to chop away 4,500 miles of unprofitable railway line and 2,128 barely used stations, the Transport Secretary announced himself ready and able to heal some of the wounds created by those savage cuts, which he claimed were the “origin of the left behind towns”.

On any normal day (or what passes for normal in these strange times) Mr Shapps would have anticipated being quizzed by journalists eager to know where the money was coming from to fund such an ambitious programme of railway goodies. But this was no ordinary day; the barrage of questions fired at the Transport Secretary about the lockdown movements of Dominic Cummings, the PM’s controversial chief adviser, were predictable but no less painful for him to have to deal with. A new station at Blyth and a reinstated branch line to the seaside town of Ventnor were definitely not on the agenda for the bloodthirsty hacks.

Had the press conference not been engulfed by the firestorm over Mr Cummings’s pandemic sojourn in Durham, Mr Shapps might have had an opportunity to highlight one other railway re-opening that is widely considered to be the third most important transport construction project in the UK, after HS2 and Crossrail. East West Rail is not particularly high profile, but when completed it will restore the link between the university cities of Cambridge and Oxford which was severed in 1967 when the Varsity Line, as it was known, was closed (not, as it happens, as part of the Beeching cuts). It also has the potential, according to the independent advisory body, the National Infrastructure Commission (NIC), to secure the long-term economic health of a key area of the UK.

The decision to scrap most of the Varsity Line more than half-a-century ago – only one short section from Bletchley to Bedford remained open for passenger services – was hugely controversial and a determined campaign to have it reinstated began almost immediately. In the mid-1990s an influential lobby group of local authorities came together under the banner East West Rail Consortium to press not only for the line to be reopened but also for wider improvements to be made to rail connections from East Anglia to central, southern and western England.

Twenty-one years after its formation, the consortium was celebrating its first major success when an upgrade of the line from Oxford to Bicester, initially reopened in 1987, was completed. The scheme included track and signalling improvements and a new Oxford Parkway station, with more than 800 car parking spaces and room for more than 100 cycles. Most significantly, it created a link to the Chiltern Main Line so that from December 2016 Chiltern Railways began operating passenger services from Oxford to London on the first new railway route from a major city to the capital in more than 100 years.

Five years earlier, David Cameron’s coalition government had given a tentative go-ahead for a phased programme to resurrect the Varsity Line and improve rail services to Norfolk and Suffolk. Phase Two of the Western Section of East West Rail, a £1,085bn extension of the Oxford-Bicester line to Bedford, was originally planned for completion in 2017. The best estimate now is that it might open by 2024, although even the project’s most enthusiastic backers would be surprised if that target was met. The Central Section of East West Rail from Bedford to Cambridge, which requires a new line to be built because the site of the original line was sold for development, is at least a decade away from completion.

Unsurprisingly, there is a mixture or irritation and frustration at the delay; but unlike other major construction projects, such as the hugely-divisive HS2, there is very little opposition to a rail scheme that is widely regarded as long-overdue and vital to boosting economic growth in the area known as the Oxford-Cambridge Arc. Home to two world-leading universities and a host of science and technology companies, the Arc – a region of 3.7 million people and seven major urban centres – is at risk of being overtaken by worldwide competitors because of unaffordable housing and poor transport links. In fact, ‘poor’, doesn’t even begin to describe the region’s second-rate train service. Oxford to Bedford, for example, which is 60 miles by road, involves a rail journey in to and out of London and takes 2hrs 22m. A direct rail link would see the journey time slashed to 1hr 6m. The torturous rail route from Cambridge to Oxford – 84 miles by road – also requires travelling via London and takes about 2hr 30m, almost 30 minutes longer than an average car journey between the two cities. Not surprisingly, commuting between key towns and cities within the Arc is almost non-existent.

In a 2017 report, which was accepted in full by the Government, the NIC threw its weight behind a reopened Varsity Line and completion of the highly controversial Expressway road link from Cambridge to Oxford. The report highlighted the economic significance to the British economy of the Arc, which contributes just over £90bn a year, a figure which it predicts could rise almost threefold to £250bn a year with investment in homes and infrastructure. The NIC, therefore, links the construction of transport infrastructure, such as East West Rail with the need for one million new homes to be built in the Arc by 2050, with a recommended development of up to five new garden towns or villages. Such a move, it argues, would ‘attract and retain internationally mobile talent and businesses in high growth industries’.

At the same time as the NIC was publishing its blueprint for the UK’s version of Silicon Valley, the Government announced it was establishing an arms-length organisation, East West Railway Company (EWR Co), to speed up development of the new Varsity Line. Progress has been slow in the two-and-a-half years since then, but in February this year approval was finally given to push on with the much-delayed Bicester to Bedford section following an arduous and drawn-out public consultation. EWR Co is now eager to get shovels in the ground and construct a rail corridor that will improve both cross-country links and north-south journeys. A spur from Bletchley to Milton Keynes will create a connection to the West Coast Main Line and Bedford will provide one to the Midland Main Line.

The announcement that Bicester to Bedford could finally go ahead, which came just days after a preferred route was confirmed for the £3.4bn Bedford to Cambridge section of East West Rail, was warmly welcomed by campaigners. ‘East West Rail will transform the way people travel within and across the region,’ opined Councillor Mark Shaw, Chairman of the East West Rail Consortium, which had been pushing for 25 years for the Varsity Line to be re-opened. Councillor Shaw pledged that the consortium and local authorities in the area would continue to work with the rail industry to ensure the western section of East West Rail is ‘delivered as quickly and smoothly as possible’.

Such an outcome may be out of the hands of local agencies who will be relying on a Government, battered by the trauma of the coronavirus crisis, showing a more consistent approach to East West Rail than it has up to now. When approval was originally given for the line to be built it was planned to be fully electrified; that decision was reversed in 2016 against a backdrop of soaring costs of electrification elsewhere on the rail network. However, erecting wires now appears to be back on the agenda. In 2016 a Network Rail spokesperson claimed that by 2019, the start of the organisation’s next five-year funding period, East West Rail would be “among the best-planned schemes in our Railway Upgrade Plan”. Four years down the line, some might question the veracity of that statement.

The next 12 months are set to be crucial; by summer 2021 we should have a much better idea of the likelihood of Phase Two of the western section, the line from Bicester to Bedford, being ready by 2024. In May 2017, months before he was appointed Chairman of EWR Co, Rob Brighouse, a former Managing Director of Chiltern Railways addressed the All-Party Parliamentary Rail Group. Mr Brighouse, who was in the middle of setting up EWR Co at the time told the MPs that the Oxford-Cambridge Arc needed a 90mph suburban railway connecting houses to jobs. He also admitted that there needed to be a culture change in the rail industry to drive down costs. Few would argue that he was wrong on either count. Now, with East West Rail years behind schedule, successfully melding those two objectives will be key to using transport to create something better.

This article is the latest commissioned by Cogitamus Limited from Chris Randall, an award-winning transport journalist and former senior manager in the rail industry.