The long, long wait for the Railways Bill to leave the station 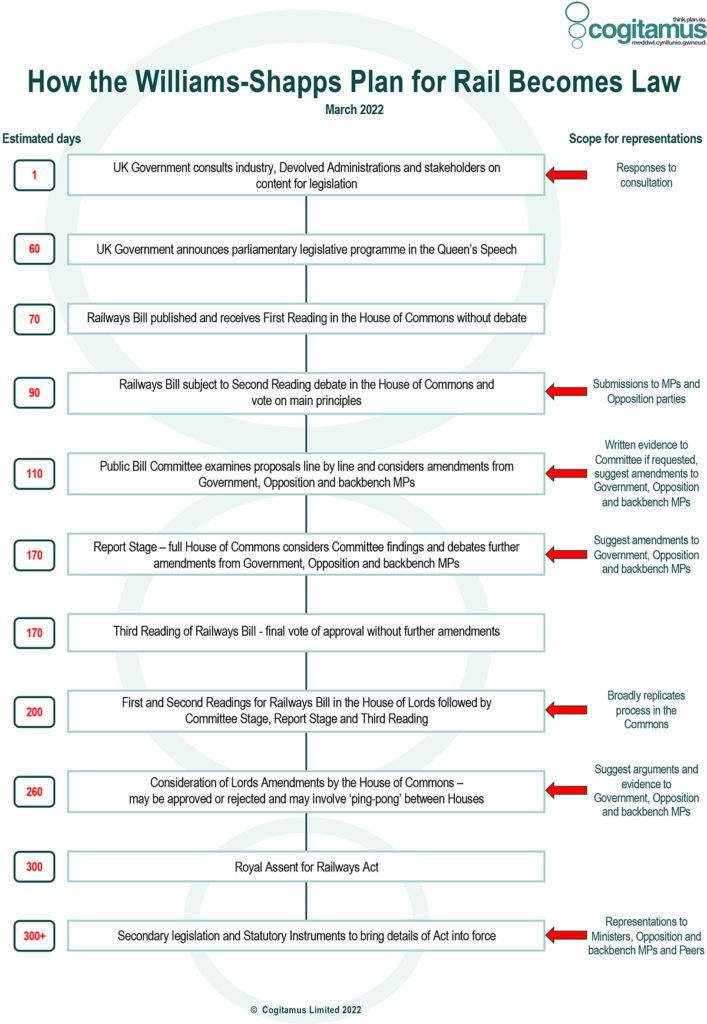 The Williams-Shapps Plan for Rail was published on 20 May 2021.  Some elements of the plan require primary legislation.

Based upon our experience of advising on the passage of earlier Railways Acts, this is our assessment of the likely timetable that would be followed in turning the recommendations from the Williams-Shapps Plan for Rail into law.

Please contact us to discuss how we can assist your organisation in making representations at the highlighted points or subscribe to Rail Legislator for step-by-step insights into the process.

Waiting rooms have been a key feature of station architecture since the very earliest days of railway travel.  But eagerly anticipating the departure of a train must rarely have been such an extended experience as the clock-watching for the as yet untimetabled next piece of railway legislation.

It was in February 2021 that Cogitamus first published our widely viewed schedule describing how the imminent White Paper’s recommendations on the future of Great Britain’s railways was likely to be turned into legislation.  When establishing the Keith Williams rail review back in 2018, then Transport Secretary Chris Grayling MP had been explicit that there would be very little delay between the publication of his recommendations in a White Paper and their conversion into law.  Nothing said subsequently by newer Ministers had changed this impression.

It was not until 20 May 2021 that the White Paper – now branded ‘The Williams-Shapps Plan for Rail’ – was published eponymously by the current UK Secretary of State for Transport.  Only gradually did it dawn on everyone that its recommendations were certainly not being routed onto a high speed line – or even a bit of conventional track – towards their destination.  Whilst perhaps not shunted into a siding, the White Paper could at the very least be said to have been rolled into the depot for a great deal more work to be done on just about its every aspect.

After ten months in which we have from a distance observed the sparks and listened to the hammers bashing, there seems to be at least some prospect of a finished product emerging from the workshop in a fit state to be inspected by our elected representatives.  For that reason, we have revised our projected timeline for a new Railways Bill to depart on its way through all of its parliamentary stages, and hope our readers will find this new flowchart of interest.