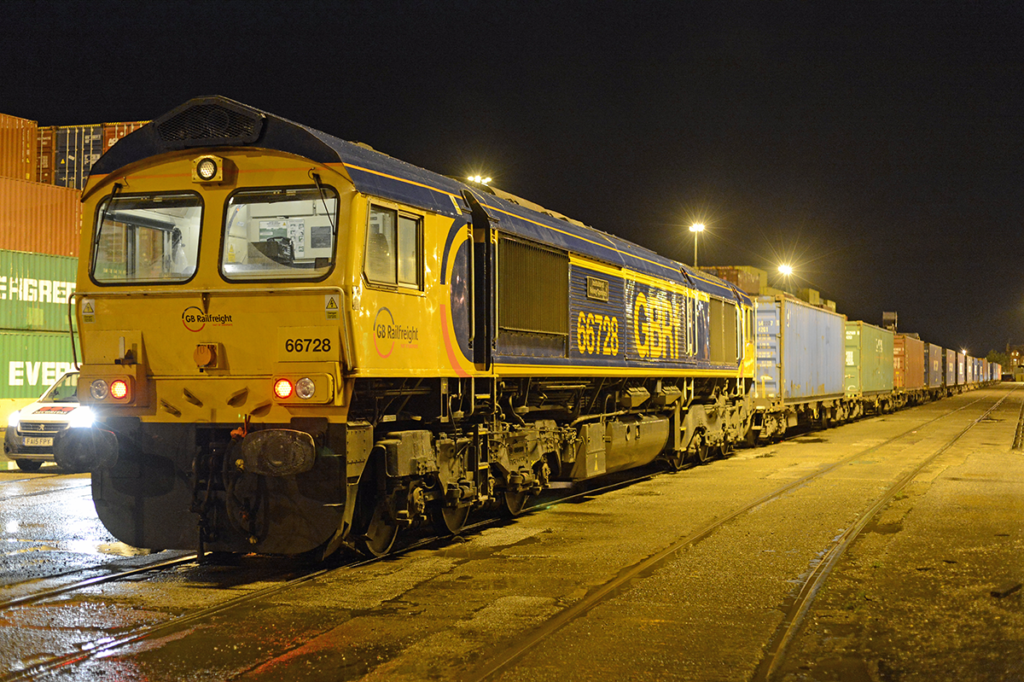 The current serious shortage of HGV drivers is good news for rail freight companies, who now have potential customers beating a path to their door.

Aggregate volumes are at record levels, helped both by the HGV driver shortfall and major construction projects, including HS2. Movements of maritime containers are also strong; if I want to move a box from, say, Felixstowe to Birmingham, my choice is now more strongly tilted in favour of rail, although at the same time shipping lines and ports are facing big challenges, with shipping rates going through the roof and container shortages and port congestion both causing major problems. The modern “just in time” global economy is showing some cracks at present, from a shortage of chips for the car industry, sky high energy prices and the recent concerns about availability of CO2 for the food industry.

Rail already has a good share of maritime container movements, so the biggest opportunity is likely to be in domestic movements of consumer goods, building on the current base of supermarket distribution flows, primarily between Daventry and Scotland. In the short term, rail also inevitably has constraints, with long lead times for training additional drivers and procuring new locomotives and rolling stock.

There are network capacity and terminal constraints too. Despite recent upgrades, movements from Felixstowe are now realistically close to the current practical limit. The port is at the end of a single track, non-electrified branch line, and during the daytime freight shares the route with an hourly, lightly loaded passenger service; train paths from Felixstowe to Yorkshire and the Midlands are also limited by pinch points in the Ely area. Inland terminal capacity has been significantly increased in recent years, with further new terminals and expansion of existing locations in the pipeline, but there is inevitably a lead time, and many planning applications are vigorously opposed locally.

Rail freight has over-riding environmental advantages, with a carbon footprint around a quarter of the CO2 emissions per tonne mile of road haulage. De-carbonising heavy goods vehicles looks at best problematic – the leading solution suggested so far seems to be to install overhead electric catenary on the slow lanes of motorways, although many people are deeply sceptical about this idea. So the future for rail looks bright, and I’m sure freight companies are considering driver recruitment, together with new locomotives and rolling stock. I would expect future locomotive orders to be electric, with diesel/battery capability for “last mile” operation, similar to the ten locomotives already on order for Rails Operations Group, further improving rail’s environmental performance.

The joker in the pack is the potential for electric multiple unit operation at passenger train speeds for high value, small consignments, feeding into city centre terminals for final distribution by electric road vehicles. This could be a significant new market, which is expected to be trialled in the near future.

After many years of systemic decline, strongly related to the long term contraction of heavy industry and the demise of coal-fired electricity generation, the future now looks much brighter. Profitability in the short term is almost certainly improving too, both because of higher volumes and firmer prices.

A potential, early “big win” for the shadow Great British Railways would be the creation of a more rational, integrated passenger timetable. Except for a handful of open access trains, all on the East Coast Main Line, the entire passenger network can now be specified on a more consistent basis, providing a coherent network of services, almost all on a regular interval pattern, planned to deliver good connections where these are important, and designed to maximise passenger numbers, hence the economic benefits of the network – giving both passengers and the taxpayer their best bang for their buck.

Sadly, there is as yet no sign that this opportunity is being grasped. This probably reflects that timetable specification is still in the hands of individual train operating companies who are largely making decisions in isolation. Three examples:

It would of course be ludicrous to plan everything from GBR’s headquarters, and absolutely unacceptable to the devolved administrations. But some high level principles would be sensible:

There is a potential virtuous circle for the passenger railway lurking in the present fog: high all day demand but much flatter peaks is an opportunity for improved profitability – and avoids the need for enormously expensive infrastructure enhancements to increase capacity for two hours a day.